Yuri Storione is a 27 years old jazz piano performer and composer with a classical background. He plays piano since he was 4 years old. He is the winner of the “Langnau Jazz Piano Competition 2018” and one of the 3 finalists of the prestigious “Montreux Jazz Piano Competition 2015” in Switzerland He is a graduated student of Basel Musikhochschule – Jazz Campus where in 2019 obtained his third Master degree. Yuri has been playing in some jazz festivals and important venues around Europe such as: Malaga Jazz Festival 2018-2019, Bebby Jazz Festival 2017-2018 (Basel) L’Estartit Jazz Festival 2015(Spain), Slovenia Jazz Fest, Laeso Jazz Fest(Denmark), the annual ‘’European AEC Jazz & Pop platform meeting 2015’’ and for some ‘’Yamaha-Spain’s’’ events too. He released on November 2019 his second album as leader “Where do we start live at Bird’s eye” with his quartet in which he plays with Perico Sambeat. He collaborated, learned and played with several big names such as: Larry Grenedier, Jeff Ballard, Mark Turner, Perico Sambeat, Esen Aydin and many more. 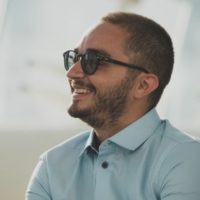